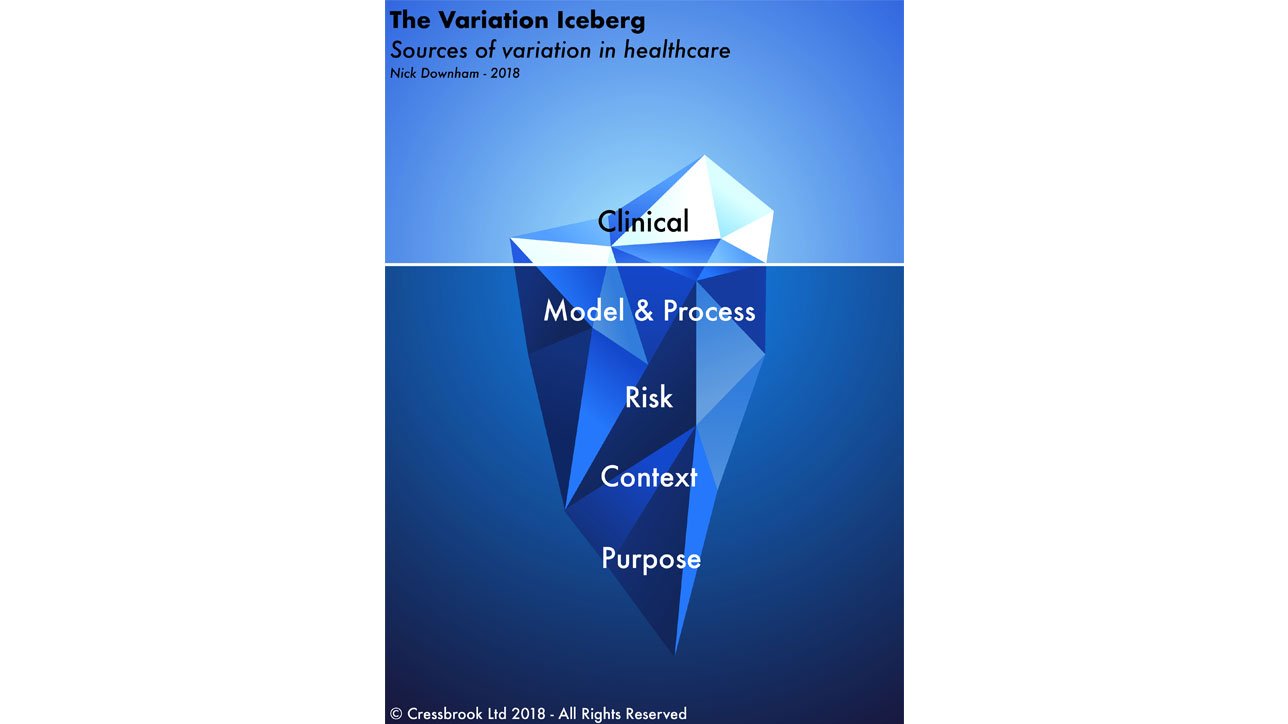 This article gives both an introduction to variation and specific insight to what it means to General Practice.

Skip to the bit specifically on General Practice

What is variation?
The American Society for Quality define variation as:

“In simple yet profound terms, variation represents the difference between the ideal and actual”.

Consider first a simple exercise. I often run this exercise with groups of clinicians. I take a child’s toy – a catapult, and I ask a group of six people to fire a ball five times each from a defined, set, angle from that catapult. You would expect such a group to all be achieving the exactly the same distance on each shot. After all, they are using the same equipment, the same angle and the same ball. But the capability of the group to deliver the same distance always varies – a lot. This is variation in action.

In five minutes you could probably list forty or fifty sources of variation. Ranging from how far people pulled the catapult back (was it exactly the defined angle?), changes in how people held the catapult, differences in measurement, differences in interpretation of the task and even, sometimes, a little gaming (cheating) of the exercise. These are all sources of variation.

Now consider a process in health or social care. There are hundreds if not thousands of sources of variation. They all have an impact to some degree and all making the difference between what is intended and what actually happens.

The father of quality thinking, W Edwards Deming sums it up nicely. “If I had to reduce my message for management to just a few words. I’d say it all had to do with variation.”

We also wish to understand whether variation in a team’s response to patient need is driven by to be expected variations in people, process and context (normal variation) and what variation has been caused by something unusual and specific? (special cause variation). Key to making this differentiation is the understanding of variation over time.

Why is everyone talking about it now?
Slowly, and in small steps, the NHS is beginning to embrace quality as a defining principle. This means thinking about the process and context, as well as the outcomes. Despite it being a central facet of NHS core values, this direction battles against the almost overwhelming forces of economic and industrial ideology that dominate much of NHS leadership thinking.

Many thought leaders and think tanks, as well as NHS England (a central organisation of the English NHS) are promoting the role that understanding variation has to play in improving the quality and safety of healthcare. Examples are:

What does it mean to general practice?
The topic of variation in general practice is not a new one and operates at a number of different levels. It not only impacts quality, but also has consequences for leadership decision-making. 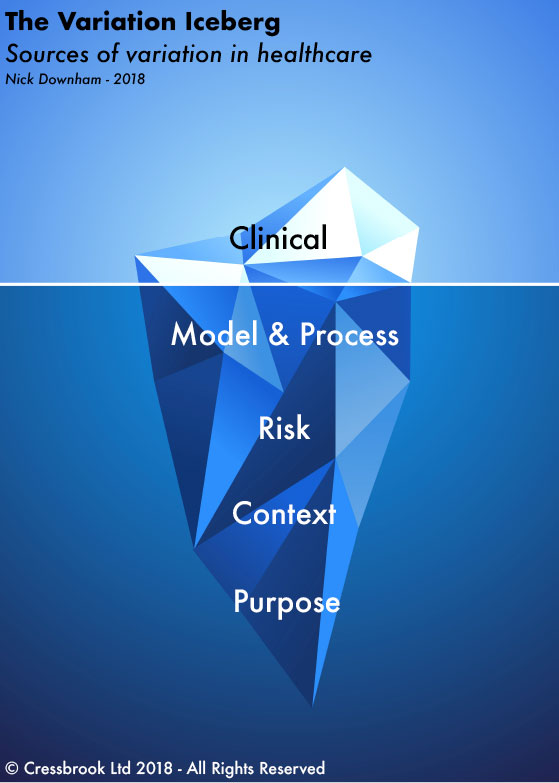 Where and why does variation exist in general practice?
The classic Iceberg model applies here. When thinking about variation we tend to concentrate on what is above the waterline, but it is what is beneath that underpins and holds the key to the causes of it.

What general practice tends to concentrate on is a simplified subset of clinical variation which is driven by QOF[1]. QOF details the basic standards for practice process, interventions, patient assessments, care planning and outcomes for many high volume conditions and patient groups. Without getting into the discussion about where these clinical standards come from, the intention is that QOF incentivises all practices to do these basic things.

My experience is that as with all co-ercive interventions (an incentive is co-ercion), this has quickly lost meaning. GPs often separate the work of QOF, from actual doctoring. They see very little link between QOF and their practice, other than it being a bureaucratic burden.

All that said, clinical variation is still very important. GPs vary in their prescribing choices, in their diagnostic choices, in their consultation approaches and in their knowledge around different conditions. Patients get different things from different GPs. This potentially impacts quality and safety; but it also impacts efficiency, it impacts cost and also it means that patients get conflicting responses.

Data on implications of all of this is available although either difficult to capture or in some cases dated. Despite this, the data is hard hitting. The comprehensive NHS Atlas of Variation paints a stark picture of variation. For example it suggests that variation in the number of people on a dementia register as a percentage of estimated prevalence varies between 26% and 58.8% across practices within NHS England.

On the subject of prescribing there are countless examples. For example this scientific summary from the NIHR journal details variation of prescribing of nonsteriodal anti-inflammatory drugs between GPs and between practices. The Society for Academic General Practice found that rates of prescribing for sore throats varied significantly. It found that there some practices can be 2.5 times more likely to prescribe for patients presenting with a sore throat than others (when presented with the same patient).

With my collaborators Becky Malby and Tony Hufflett at London South Bank University we have created new analysis to explore variation from an angle not possible through nationally collected data. Through GP led data collection we have found that within practices there is variation in next steps decision making by GPs. For example, within one large practice the recall rate (‘I would like to see you again’) varied between GPs from 6% of patients to 33% of patients seen.

More anecdotally, I have recently been having discussions with practices on outstanding medication reviews (the volumes of outstanding med reviews can be substantial). While the problem is to a great extent a product of patient behavior and practice capacity, in unpicking the problem, it is clear that there is variation in what priority different GPs give to medication reviews.

Again, this is not about a good or bad judgment and of course the causes are multifactorial.  What is clear is that there is variation, it does have a profound impact and the best people to unpick all of this are the clinicians themselves.

A simple way I begin to explore this is by asking GPs what kind of practice they work in.

Are you working in a practice that is essentially a roof over four or five autonomous clinician’s heads? With the practice essentially providing payroll and back office support and the clinicians go about their work independently of each other?

Are you a family of practitioners, with a consistent and co-developed approach to practice?

So what drives all of this? I have identified four drivers of variation that underpin the visible variation as detailed above.

Model (or design)
Practices vary by model. Some have triage systems, some have a wide skill mix, some are big, some are small, some offer a wider range of services, some have great links with other services, some run community groups and some actively engage in developing their communities. Again, not a right or wrong judgment, but this all has an impact on the services offered. Ultimately the model of the practice influences its capability to respond to patient demand (see Purpose below) – and what type of demand it can respond to, such as health and also social.

Perception and management of risk
Risk drives much of the variation in practice. The views that different clinicians take around risk, driven from a medical legal standpoint can divide clinicians. It impacts next steps decision making with patients, and it determines how defensive different clinicians’ practice is. This results in overseeing and over treating – the levels of which vary by clinician and by practice. It is not just risk of litigation or of harming a patient. Risk around triggering complaints is also a source of variation. It is common statement that more experienced clinicians manage risk more effectively and thus practice less defensively. I don’t believe it is as simple as this. A clinician’s perception of risk is also driven by previous incidents, by complaints and by training.

The role of the professions
Professional ideology drives variation in practice from two main perspectives.

The first is the power / relational dynamic between the professional and the patient. The approach from a GP who takes a traditional medical professional ideology may take the view that they the professional has the role of identifying what is wrong and telling the patient what to do about it. It could be described as a paternalistic relationship with the patient. On the other hand, another GP may take a different starting point with a shared power dynamic. Helping the patient take some of the responsibility. An example of this is patient centred care. https://gpview.co.uk/how-do-we-reclaim-gps-core-role-in-long-term-condition-management/

Context
Context, in this case external context, causes a lot of the variation in different practices’ capability to respond to patient demand and how they are shaped and operate. This context could be seen as the system they work within. Factors that influence this range from:

• the prominence of GP networks (such as federations and the LMC),

• the stand point of the commissioner (do they take a performance management or a developmental stand point),

• the population served (this influences not only the demand but also the attraction and retention of staff),

• the historic reputation of the practice(s),

• history of major safety / safeguarding incidents in the local area,

• and demand variation including seasonality.

Purpose
Finally we have variation around the purpose of a practice. Specifically this is around the role an individual practitioner, and / or a practice chooses to take in meeting the social determinants of health.

Through a small-scale study I supported, GPs judged that 49% of patients were likely to be struggling in their context (severe social stressors) and 6% had a chaotic social context. In other words more than half of the patients seen were likely to have a life context that would deeply impact their ability to follow advice or make lifestyle changes. This dramatically limits the effectiveness of a health dominant approach to general practice.

What a GP choses to do about this is a source of variation. Some GPs chose to try and help with the social determinants, some chose not to. This is driven not only by capacity (time), but also by what they see as the purpose. Should the social care system pick these patients up? What are my beliefs around an individual’s responsibility? Should we as a practice devise ways of helping people in this situation? A GPs response is deeply personal in many cases. Driven by preferences, ideology and politics.

The net result is very different individual approaches to practice from GPs and also very different practice models. For practices that view social need as part of their purpose, the model can be very different. For example take the acclaimed Bromley by Bow Centre. It was started as a community centre first, and then health services added.

The so what?
Returning to Deming’s System of Profound Knowledge, for a profound knowledge of process, then we must seek to understand variation. What this discussion highlights, is that variation in general practice is multilayered and should not be oversimplified. It is also not a case that all variation in bad. In fact the ability to vary is key to helping some patients. As a vital first step, seeking to systematically understand variation using the prompts in the Variation Iceberg places you in a much better position to understand why things are as they are, and what the conditions for change need to be.